Apologies for my english…

There are many different opinions on how to use this function in InDesign. To explain what it is used for, we need to start from the justification window, which allows us to set the spaces between words and letters, and therefore the scaling of glyphs, with the aim of obtaining a regular color of the page in InDesign. 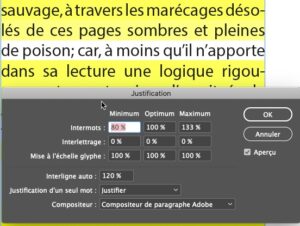 When Gutenberg (it all starts with Gutenberg, it is said) practised the composition of the Bible, what did he really want? In fact, a spacing as regular as possible between the letters : 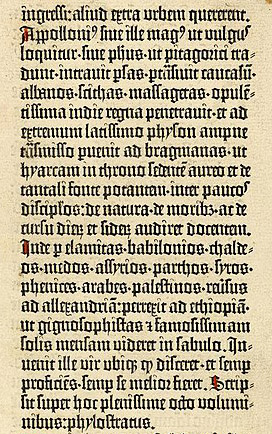 As you can see, this is not really justified. The floating punctuation is very nice. On the other hand, Gutenberg had created a whole arsenal of ligatures, abbreviations and alternative forms of letters (narrower because they were slightly truncated, for example) which allowed him to calculate his justification and to arrive at a very beautiful color of the page, and above all an incredibly regular space between words… Let’s remember that.

It should be remembered that when DTP appeared with PageMaker, computer-made layouts were stigmatised – because of their typographic greyness, judged by typographers of all stripes to be amateurish or just plain excruciating… And yet some aficionados spotted the spacing settings in PageMaker: 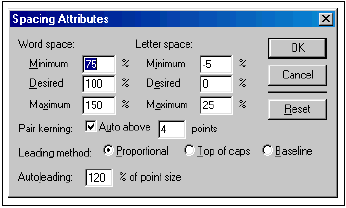 Which are relatively bad by default, and we will find the trace of it later in InDesign…

In the early 1990s, calligrapher and type designer Hermann Zapf teamed up with Peter Karow and Margret Albrecht of the URW to develop a typesetting program that could reproduce the quality of the Gutenberg Bible. The so-called « hz » program combined the advantages of the Knuth and Plass algorithm with another parameter: the variation in the width of the letters.

This « glyph scaling » technique does not involve varying the space between letters, but rather changing the size of the letters themselves: it involves compressing or expanding the shapes. The technology of the hz program was eventually purchased by Adobe, probably with the aim of integrating it into Adobe InDesign.

So there is still some controversy about this feature, which has led many people to denounce this scaling of glyphs, explaining that InDesign distorts the letters horizontally and does not compensate for the differences in stroke width of the vertical stems, which would result in letters with a strange contrast and terrible shapes. Peter Karow and Hermann Zapf always compensated for these distortions and kept the original stem width – so «  »i » » could not be scaled at all, «  »m » », on the other hand, was quite easy. (source: Johannes Ammon) Many others refuse to use it, like the author Pierre Ruiz in his training courses on LinkedInLearning.

Two questions arise in relation to this.

Contrary to what one might imagine, this scaling is not at all a standard horizontal scaling process, which would enlarge the shape of the letter overall. It seems from my tests that, on the contrary, the letter shafts are preserved…
In the example animated gif below, the black is the base text, all 100%, while the blue text has as justification parameters this, which is of course exaggerated:

And this is the result:

The only setting InDesign has to justify the text in this very narrow justification is the scaling of the glyph. So I force the widening to see the effects.
And what we observe… is that InDesign clearly widens the letter (in blue) while modifying very little the letter stems! This must correspond to an update of InDesign, because it clearly contradicts several tests made by Johannes Ammon or by the Norwegian typographer Torbjørn Eng.

Glyph scaling or letterspacing, which is worse?

So let’s also test the feeling, by comparing letterspacing and glyph scaling…

This is up for debate, but for me, at similar values, interlettering is more conspicuous than scaling, which is what I wanted to demonstrate. And clearly, in texts justified in reading size, scaling can be used again, and certainly to fight the inter-word spacing which for me is the worst, the one that should only be modified when one really can’t do otherwise, confere… Gutenberg! So why not try to reduce the inter-word space, as opposed to the default settings of InDesign… If we take these settings below, it could well go in this direction: